8 Divisions for a treble instrument
& Arias with Ritornelli by Carlo Pallavicino
GB-Lcm C41/1 (formerly II.F.10 (2))
Christopher Simpson The Division Violist, London, 1659.
This volume contains Divisions from the back of one of the copies of Simpson’s Division Violist in the library of the Royal College of Music, London. The book is bound in brown leather. It has an ‘ex libris’ sticker inside the hard cover which reads ‘The Revd. John Parker/sub libertate Quietem’. It was last bound by R.S. Buffery, 22 Mortimer Street, W. around the turn of the century. At the top of page 1 one can read ‘T Jones Sale. Feb 1826 No. 143 with zinc plate’ (almost certainly A. Novello’s handwriting). Perhaps Novello acquired the book in a sale of the belongings of T. Jones and later passed it on to Revd. John Parker, who either received it already bound or had it bound after acquiring the book. On the flyleaf to The Division Violist someone wrote ‘Mr Cutts’.
The Divisions bound into the back of the book are in two or three different hands. On the back of the last printed division of the Division Violist are the Rules for Gracing.
Charivari  Publications would like to thank the Royal College of Music Library, London for assistance and permission for publication.

See all music in the Shop 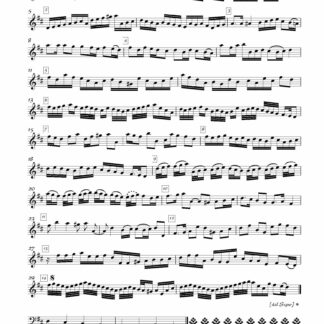